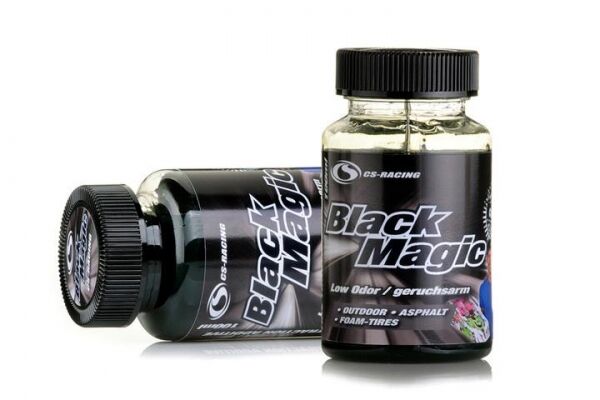 CS Electronic introduces the "Black Magic" a new adhesive specially designed for 1/10 and 1/8 Nitro cars with foam tires. Previously many drivers repeatedly mixed their own adhesives despite the ban. The aim was to increase adhesion of the Nitro cars and thus to improve the lap time .

Since the control, whether adhesive was used or not, still does not work completely , it was released for some races and in certain countries now .

Therefore CS -Electronic offers a bonding agent which increases the adhesion and this over a long running-time. The mixture of "Black Magic" adhesive has convinced all test drivers after numerous tests. It greatly increases the grip, but doesn`t make the car too aggressive at the beginning like other adhesives do. It is most extensive , of all adhesives, so that the yield of fast laps with adhesive is the greatest. And also there is no transition when the treated rubber layer is worn off, the adhesion does not simply stop, but gets less from round to round , so that the driver can react.
These features make the Black Magic adhesive in the sum so superior.

Wherever adhesives are allowed you have a distinct advantage over untreated tires!

Application:
The maximum grip is achieved by rolling and heating at about 140° (60° C) with a machine. After this pretreatment, the tires should be stored to act one night in a closed plastic bag. Dry the rub tires on the next morning with a towel and allow them to air at least 1 hour before use. For rapid deployment , the exposure time should be at least 60 minutes.